The Future Is Now

I’ve often wondered if Star Trek creator Gene Roddenberry’s belief in humans evolving past the need for money was possible.

Whether salt, gold or paper bills, some sort of monetary system has existed for a very long time.

How many people would show up at work Monday morning without a paycheque?

Would somebody really cook for the joy of cooking and freely serve meals to those wanting to eat out?

Would professional athletes risk concussions and aged bodies just to play for the fans?

Let’s be honest, who would pick up garbage and do all the slimy gross jobs without being paid?

Turns out we would. In spades. 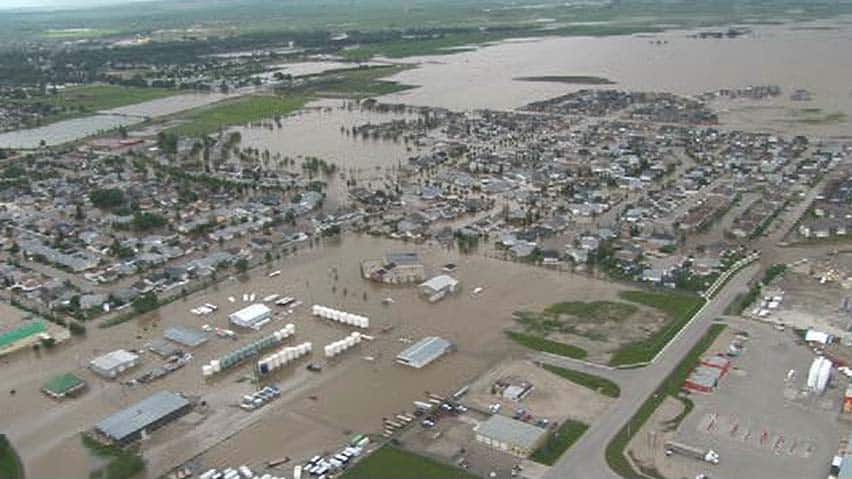 June 2013 saw Southern Albertans experience the wrath of a “perfect storm” creating a 1-in-1000 year flood.

More than 25 communities declared states of emergencies. Tens of thousands of people were evacuated from their homes. Others watched their homes drift downstream.

The entire town of High River – population 13,000 – was evacuated. Some returned home a week later to begin repairs while others waited three weeks for flood waters to drain. Even now eight weeks later the hardest hit cannot return home as the damage is beyond severe.

We returned to our property in the second wave of re-entry 10 days later.

Surreal is the closest word to describe the feeling driving through town.

Once clean, busy streets looked like the day after the asteroid hit – dirt laden, disheveled and deserted.

But then something magical happened when we arrived on our street.

Neighbors were in the streets greeting each other. The mood was upbeat.

Sleeves were rolled up, rubber boots slipped on and masks pulled into position.

Time to get down to work. Rebuilding was the only path forward.

In the days and weeks following, volunteers showed up in droves from across the province and across the country to help in any way they could.

People brought food and drove street to street offering lunches, snacks and drinks along with more gloves and masks.

The magnitude of generosity and human spirit is mind blowing.

People literally just showed up and said “tell me what to do.”

Money and social status took a back seat to ensuring everyone gets through.

Businesses are working hard to get running again.

Requests for a job posting or a scarce place to rent have thousands of eyes on the watch.

People genuinely want to help, are called to help each other.

Giving of ourselves transcends the walls we build for protection. When another is in need there is a part of us in need too.

Coming together is our way forward.

We raise the bar on possibility when we show up as our true selves.

Gene Roddenberry was right. We can evolve past the need for money and we’re much closer than we think.

Crazy for cats and potatoes, Lorraine's insatiable curiosity of Life leads her to question, explore and push beyond the box. A self-professed "left-brained creative big picture" type, she has an intuitive knack for seeing beyond and beneath first appearances while at the same time nerding out on the details. Most of all she sees and holds others in their highest until they can see it for themselves.

Get the details on emails, preference settings and privacy

Something went wrong. Please check your entries and try again.
Scroll To Top